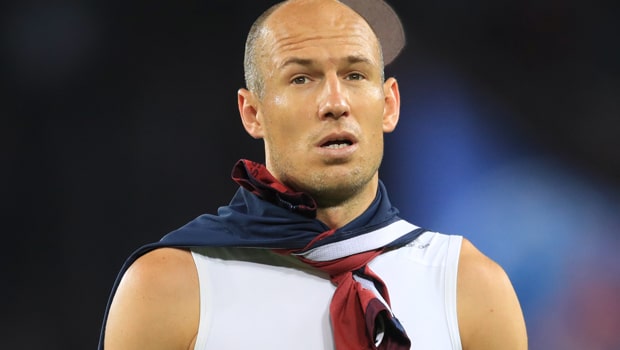 Arjen Robben is weighing up his options upon leaving Bayern Munich with Leicester City emerging as a possible destination.

The Dutch winger is to end a 10-year stay with Bayern this summer after winning his seventh Bundesliga title.

He could play his last game for the club this weekend when they play RB Leipzig in the German Cup final but it has already been decided that he will leave the club when his contract expires this summer.

The 35-year-old is likely to attract interest from China and the USA but there may be offers coming in Europe too with Leicester named as a likely destination though nobody at the club has made any comment.

Robben himself has not said anything about his own preferences, refusing also to rule out retiring from the game. He told the BBC: “It is an option, but I don’t know whether it will happen.

“It is not an easy decision to make. If you decide that you are going to keep playing, you have to find a place where everything is just right, not just in terms of football but also for my family.”

Robben has previous Premier League experience, having spent three years with Chelsea between 2004 and 2007. He left Stamford Bridge to join Real Madrid and then joined Bayern Munich in 2009.

He has made over 300 appearances for the German champions and, throughout his time in the game, has won 12 league titles, a Champions League and seven domestic cups.

Though a move to King Power is one possible destination, a return to his native Holland has also been mentioned with former club PSV Eindhoven among those who could be interested.

Bayern Munich are priced at 1.53 to win the German Cup to secure the domestic double with RB Leipzig 5.25.

Bayern missed out in the Champions League this year where there is an all-English final, Liverpool 1.95 to beat Tottenham who are at 3.80.