Bundesliga: Bayern Munich on the brink as Dortmund slip again 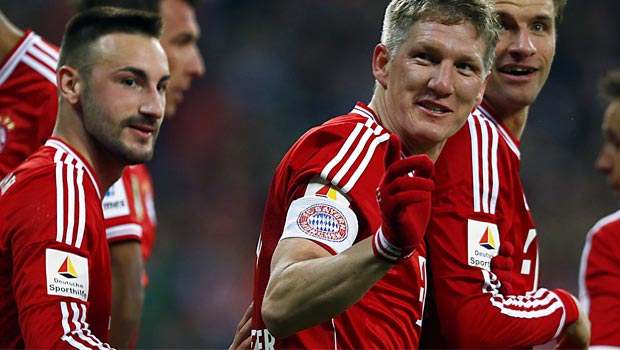 Bayern Munich could clinch the Bundesliga title next weekend after defeating Bayer Leverkusen 2-1 to extend their unbeaten league run to
50 matches.

The Bavarians moved 23 points clear at the top of the table after yet another win at the Allianz Arena, Mario Mandzuckic and Bastian Schweinsteiger with the goals as they moved to within touching distance of retaining their championship.

Bayern’s win, coupled with nearest rivals Borussia Dortmund’s 2-1 defeat to Borussia Monchengladbach earlier in the day, means Pep Guardiola’s men could win the title as early as next week.

Die Roten will need to beat Mainz and hope both Schalke and Dortmund fail to win if they are to clinch a record 24th title.

Guardiola says he is unconcerned as to when Bayern can win the league and is eager for his players to continue producing the kind of professional displays which have put them in their current position.

“It’s not important when we win the league, it’s important to keep our performances levels high,” Guardiola said.

The Bundesliga title could be the first part in a repeat of last season’s treble with Bayern still involved in the DFB Pokal and the Champions League.

Bayern are priced at 2.90 to become the first team to retain the Champions League in its current format, having reached the quarter-finals earlier in the week.

While Bayern are on course for a clean sweep of silverware it looks like being another difficult end to the season for Dortmund after their seventh defeat of the league campaign at Gladbach.

BVB are now in danger of being overtaken by Schalke in the race for second after the Royal Blues came away from Augsburg with a 2-1 win on Friday night.