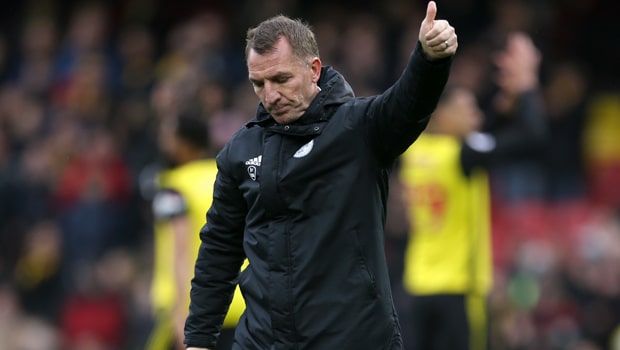 Brendan Rodgers saw enough from Leicester City to encourage him despite a late Andre Gray goal condemning his side to defeat a 2-1 against Watford at Vicarage Road.

Rodgers was overseeing his first game in the Leicester dugout since moving from Celtic at the start of the week and it looked as though Jamie Vardy had secured a point for his team when he levelled with 15 minutes left.

Vardy was typically composed to convert from Youri Tielemans’ pass, cancelling out Troy Deeney’s early header for the home side. Indeed it was Leicester that looked more likely to on and get the winning goal but they were hit with a sucker punch in stoppage time.

“I thought after going behind so early we regrouped and had some good moments. At half-time we reinforced about some issues around the speed of our game but I thought the play was excellent,” said Rodgers.

“It looked like only one team would win the game. When we had an opportunity it was a great pass from Youri [Tielemans] and Jamie [Vardy] does what he does. You felt Watford were getting deeper and the opportunities were coming for us.”

The stats supported Rodgers’ theory, with his side registering 14 attempts compared to Watford’s six over the course of the 90 minutes.

The manager admits that they perhaps should have closed ranks late on and settled for the point that within their grasp, something he anticipates they will learn from.

“We started to get into really good areas and the goal at the end is a case of managing the game. It is something that will get better as we work together. I was pleased with the spirit of the team,” Rodgers added.

Leicester are 1.62 to defeat Fulham on Saturday in Rodgers’ first home game as boss. Struggling Fulham are 5.50 while the draw is 4.00 at the King Power Stadium.