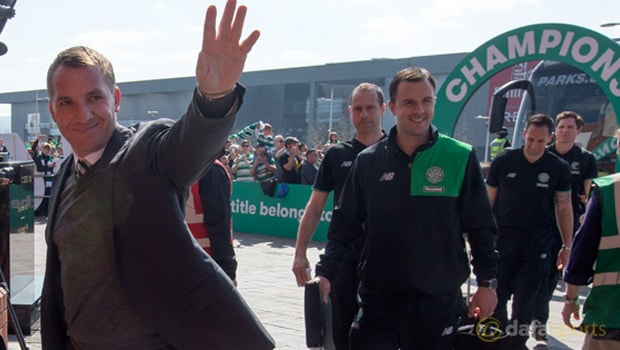 Celtic manager Brendan Rodgers was pleased with his side’s response as they bounced back from their draw with Partick Thistle by beating Kilmarnock.

The Hoops secured the Scottish Premiership title last weekend when they beat Hearts 5-0 away from home.

They took their foot off the gas in midweek and Partick were able to pick up a 1-1 draw on Wednesday night.

With Rodgers looking for perfection, the former Liverpool boss demanded a response and his team delivered 24 hours after he extended his contract at the club.

Celtic improved their unbeaten domestic record to 39 matches thanks to goals from Stuart Armstrong, James Forrest and Scott Sinclair.

The club’s fans continued to chant for 10 titles in a row, with Celtic’s recent success taking their record to six on the spin but Rodgers admits that is a long way off.

Despite keeping his feet on the ground, the Northern Irishman was proud of his team’s efforts.

He told reporters: “It was a great day for us. It has been a fantastic week for us, having won the league and committing the next four years of my life to here.

“There is no hardship, it is an incredible club to work with. But there is much more to do, much more to achieve and yes, there is a lot before there is ever 10 in a row mentioned.

“So the supporters are happy, they enjoy watching their team and I was applauding that.

“They have been singing it since my first day. I wondered what they were singing but that is their aim and it is my job to try to help them achieve it.”