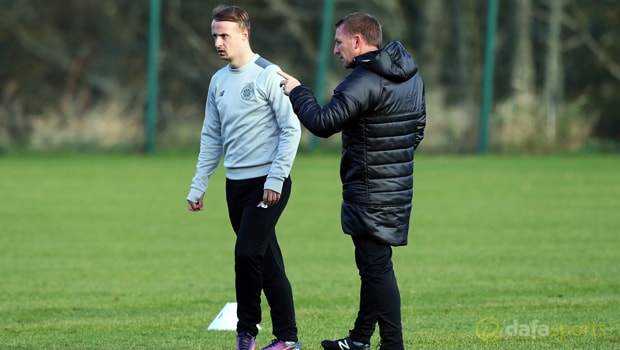 Celtic manager Brendan Rodgers insists that he can’t guarantee Leigh Griffiths regular gametime despite the striker scoring on his return to action in the win over Partick Thistle.

The Scotland international has struggled to earn regular football due to injury, illness and a strong start to the season for Moussa Dembele.

However, Rodgers opted to deploy Griffiths from the off on Friday night, handing his a first start since November 5.

Griffiths had a huge influence on Friday’s match as the Bhoys won 4-1 and to extend their lead at the top of the Premiership to 11 points.

The 26-year-old, who scored 40 goals in all competitions last term, provided the assist for Stuart Armstrong to open the scoring prior to half time before again teeing up Armstrong for a second shortly after the break.

The former Wolves man put his own name on the scoresheet to take his tally for the season to 10 with 50 minutes played.

However, despite putting in a strong showing Rodgers says that he can’t guarantee the front man will continue to get a starting role.

Rodgers said: “I am not really worried. I am of a mind to win the game, whether it is Leigh or whoever.

“I have nothing in my contract that says I have to play Leigh Griffiths. I will play always the team I think can win the game.

“I respect what Leigh did last season but I wasn’t here last season so this is a new team with a new cycle of work, a different way of working, a different manager and all the players understand that and that’s why they respect the team that plays.”