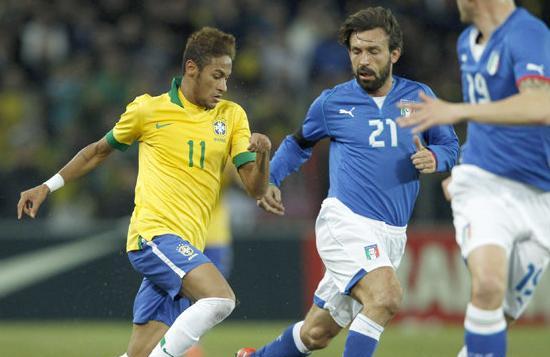 The Confederations Cup match between Brazil and Italy may be a dead rubber as both already qualified, but winners know they will avoid Spain in the semis.

In what is a rematch between two sides that have met each other twice in past World Cup finals, in 1970 and 1994, there is therefore more than pride at stake in Salvadore.

Despite all the protests and off-pitch drama going on around them, Brazil have remained focused on reaching the final, and in doing so have scored five goals while conceding none. They have to totally dominate proceedings as witnessed in the matches against Japan and Mexico, but still, the results speak for themselves.

Italy on the other hand, played in snatches in what turned into an absorbing game against Japan, failing to close down the game and allowing their opponents back into the picture before putting things right late on in Recife.

Kagawa caused them all sorts of problems, and Brazil have plenty of players of his class to do the same thing, notably Neymar, and it is to the new Barcelona man that Luis Filip Scolari will look to ensure that the South Americans do not have to meet Spain.

Cesare Prandelli will be wanting to avoid the World Champions with Italy having lost to Spain at both Euro 2008 and Euro 2012, and has his own potential match winner in the shape of Mario Balotelli, whose use of the deadball was especially effective against Japan although he may struggle against Brazil’s solid defence.

All in all it has the makings of an intriguing encounter, with the outcome resting on which of the big two names, Neymar and Balotelli, turns it on most on the day.