Everton: Blues sail past Stevenage at a price 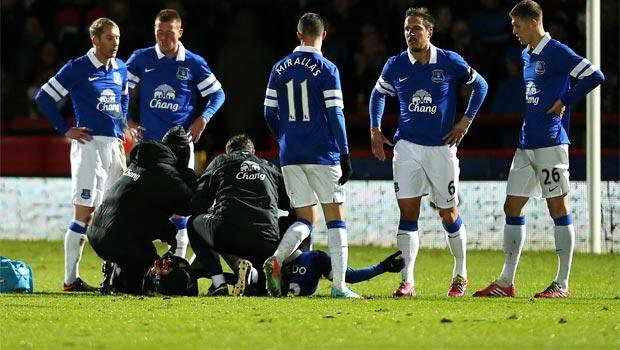 Everton sailed through to the next round of the FA Cup with an easy win at Stevenage, but lost Bryan Oviedo with a broken leg.

There were no shocks of any note among Saturday’s FA Cup 4th round ties, and certainly not at Stevenage, where Everton lined up at tea time as overwhelming odds-on favourites.

The Toffees lived up to their billing, scoring four without reply against their lowly league one hosts, two first half goals from Steven Naismith, the first after just six minutes, and again with half an hour gone, virtually killing the game off.

Stevenage saw any faint hopes of a revival end after 54 minutes when Johnny Heitinga headed home, and substitute Magaye Gueye completed the rout with some nifty footwork to make it four with the same amount of minutes left on the clock.

However, the victory came at a cost ahead of Everton’s vital Merseyside derby clash with Liverpool on Tuesday as Oviedo was stretchered off with a bad leg injury early in the second half.

The Costa Rican international was found to have broken a couple of bones on his left ankle, and faces an operation on Monday.

Elsewhere in the competition, last season’s losing finalists Manchester City were close to being derailed by visitors Watford, who led 2-0 with half an hour to go, but City stormed back to win 4-2, with Sergio Aguero grabbing a hat-trick.

As for the holders Wigan, now in the Championship after being relegated, they kept their hopes alive by knocking out Premier League side Crystal Palace, a result that keeps alive the intriguing prospect of a Wembley meeting between the last manager to hold the trophy, Roberto Martinez, now boss at Everton, and his former club Wigan.