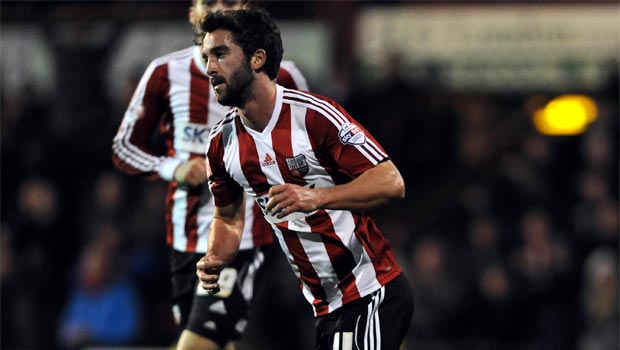 League One leaders Brentford have issued a rallying cry to supporters to get behind the Lionel Road Stadium project.

An article in the club’s matchday programme for Friday night’s game against Gillingham urged those who want to see football remain in the borough of Brentford to get in touch with London Major Boris Johnson and pledge their support before he reviews the matter on Wednesday, January 29.

The ground development received planning permission back in 2008, and if Johnson calls for the project to be placed under further scrutiny it will mean further delays.

On the pitch, Brentford earned another valuable three points after a hard-fought 2-1 win over the Gills to move back to the top of the table at the expense of Leyton Orient, who are not in action until Tuesday night when they welcome Coventry to the Matchroom Stadium.

The Bees’ picked up their tenth straight home win in all competitions thanks to a Jonathan Douglas header and a Marcello Trotta penalty, although a late Gills goal, seven minutes from time, made for a nervy finish.

Manager Mark Warburton was not only delighted with the result but the performance too, on a night when heavy rain made conditions were far from ideal for flowing football.

“We played some really good stuff on a difficult surface,” he said. “There were difficult conditions weather-wise.

“We need to be more clinical and we will get our just rewards.

“We were dominant and we need to put chances away, then the fans can enjoy the last ten minutes.

“Apart from that, I thought the boys were really good tonight.”

Brentford will be hoping to maintain the pressure on Orient, who have a game in hand but are two points behind, particularly over the next three games as they face sides in and around the drop zone.

The Bees host 23rd-placed Bristol City next Tuesday before travelling to Shrewsbury (in 21st) on February 8 and Sheffield United (20th) three days later.