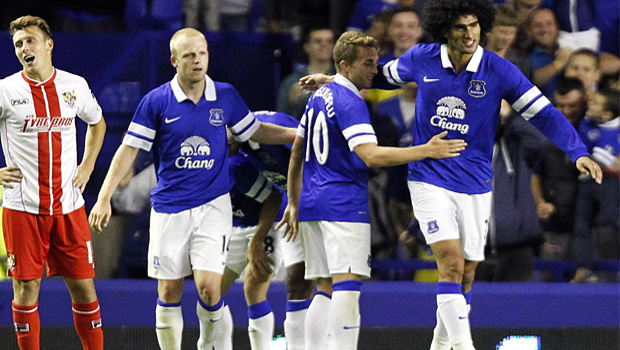 Everton needed extra-time to progress in the Capital One Cup, as Stevenage proved to be spirited opponents.

After rivals Liverpool were taken to extra time by Notts County 24 hours earlier, it was the turn of Everton to sweat as League One side Stevenage hit them on the break after 36 minutes, with Luke Freeman sending the away supporters wild.

However, Gerard Deulofeu popped up to level on his debut just before half time and it appeared as though the second half would be a formality.

All credit to Stevenage though, as they hung on in, taking the tie to extra-time during which Marouane Fellaini came off the bench and finally grabbed the winner.

Elsewhere, the Ameobi brothers provided the two goals that saw off home side Morecambe, giving Alan Pardew a first win of the season, while Aston Villa had no problems beating visitors Rotherham 3-0.

Stoke also progressed after Kenwyne Jones grabbed a hat-trick in the 3-1 home victory over Walsall.

Quite a few Championship sides progressed as well, including Wigan and Watford, and the third-round draw threw up the glamour tie of Manchester United v Liverpool.