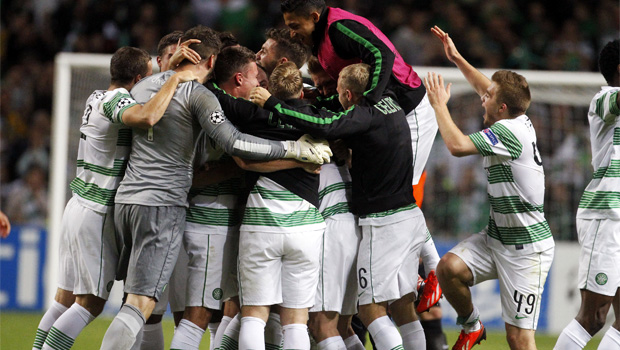 Celtic produced a thrilling late finish in front of their own fans to edge past Shakhter Karagandy and reach the Champions League group phase.

On a night of high drama at Celtic Park, Neil Lennon’s side began the night bidding to turn around a two-goal deficit against the champions of Kazakhstan, and wasted no time in tearing into their opponents.

However, it was not until added time at the end of the first half that the breakthrough finally came, as Kris Commons blasted in from 25 yards.

That set up the second half and urged on by a noisy home crowd, it was not long before the second goal arrived courtesy of Georgios Samaras who slotted past the keeper.

More pressure saw an Anthony Stokes effort come back off the bar, while at the other end Shakhter also hit the woodwork and had an effort cleared off the line before, with extra-time looming, Jamie Forrester lashed the ball home high into the net from close range to spark wild celebrations.

Lennon hailed it as the club’s greatest night in Europe, putting it above last season’s victory over Barcelona.

“I thought beating Barcelona was one of the highlights of my career,” he said. “Certainly winning the double last year was one also.

“But this eclipses everything. To come from two goals down and to win it in the 90th minute was one of the greatest moments of my life.

“Going into the break with the goal was a massive twist of fate for us.

“It changed the complexion of the team talk. We thought, ‘we are half way there’.

“But as regards important goals, I think James will get all the plaudits for getting that goal in the last minute.”