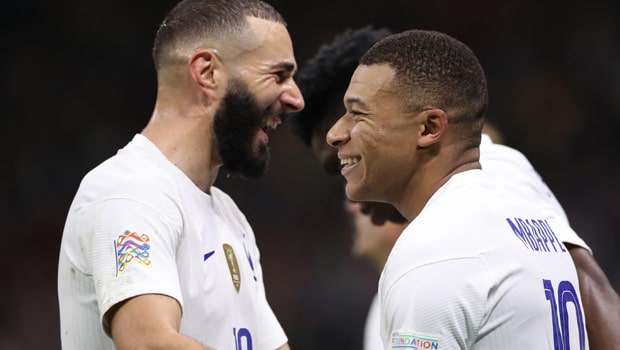 France emerged the second ever champion of the UEFA Nations League when they came from behind to beat Spain  as they replaced Portugal who won the competition’s inaugural edition.

Le Blues, who are the FIFA World Cup defending champions, needed a comeback to beat Belgium 3-2 in the semifinal and they took the same route in the final at the San Siro on Sunday.

The first was largely uneventful save for a VAR check and France’s substitution of an injured Raphael Varane.

Spain went in front in the 64th minute of the game through Real Sociedad’s Mikel Oyarzabal after a goalless first half.

However, the lead lasted just two minutes as Mbappe provided Benzema with the ball, who then curled home.

The PSG forward then scored the winner with ten minutes to play albeit needing a VAR decision as he looked offside as the French side recovered from a disappointing Euro.

France are unbeaten in their last 25 competitive games with their only better record being 27 between September 1994 and March 1999.

France will face Kazakhstan and Finland in the November international break for their final FIFA World Cup Qualifiers.

Spain will play Greece and Sweeden in their next international break fixture next month.

After a goalless first half, Nicolo Barella scored immediately after the restart to give the European Champions the lead.

Domenico Berardi scored in the 65th minute from the spot, while Club Brugge’s youngster Charles De Ketelaere scored what was just a consolation goal for the Belgians with four minutes left.

Italy will play Switzerland at home and Nothern Ireland away in November while Belgium will host Estonia and travel to the UK to face Wales in their last two 2022 FIFA World Cup Qualifying matches.