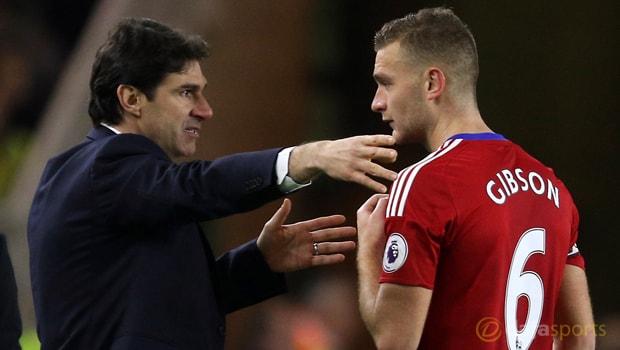 Middlesbrough’s Ben Gibson believes his side’s recent performances show they have “turned a corner” in their fight against the drop.

After winning promotion from the Championship last term, Boro initially struggled to live with the superior demands of the top flight.

However, draws against Arsenal and Manchester City, plus a home victory against Bournemouth in their three games prior to the international break showed significant signs of progress.

Despite going down 1-0 to Chelsea on Sunday, the Teessiders looked comfortable for much of the match and may even have grabbed another point had they shown more composure in the final third.

Next up for Aitor Karanka’s men is a trip to Leicester on Saturday, a game they are priced at 4.33 to win, with the draw at 3.50 and the out-of-form Foxes installed as the 1.85 favourites.

With just two victories so far this season, success at the King Power would give Boro, who are 5.00 to be relegated, a major boost ahead of what is likely to be a crucial few weeks heading into the busy Festive period.

Although his side have largely struggled for consistency, Gibson’s form at the heart of the back four has seen him linked with a potential call-up to the England squad.

Following their recent upturn in form, the 23-year-old believes Boro are now heading in the right direction and has urged his team-mates to continue producing the levels they have demonstrated in recent weeks.

“We’ve set our levels now, and we’ve been saying that since the Arsenal game,” Gibson said. “We need to keep performing like that, and fighting like that, in whatever game we play.

“I feel like we’ve turned a corner, but it’s a long season and we’ve got to maintain these performances. We have to maintain the drive, commitment and effort that we’ve shown in recent weeks.”