Beckham to retire after current season 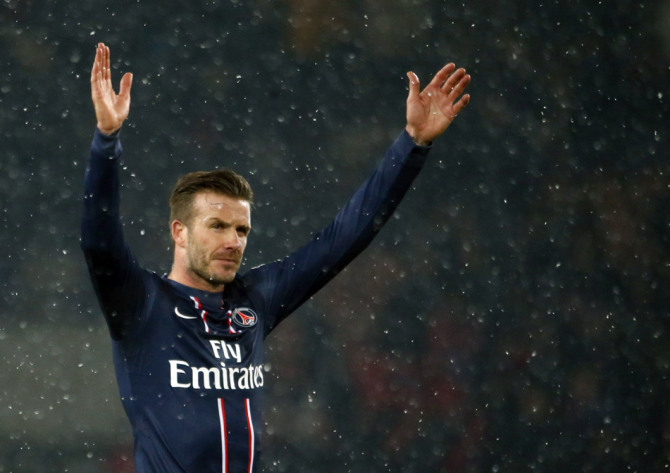 The 38-year-old has enjoyed more than 20 years in his profession, appearing in 676 matches and becoming the first Englishman to win league titles in four different countries.

Moving to Paris Saint-Germain in January, the former England captain’s short term with the French capital has resulted in the club’s first league title since 1994.

“I’m thankful to PSG for giving me the opportunity to continue but I feel now is the right time to finish my career, playing at the highest level,” Beckham said in a statement announcing his decision.

“If you had told me as a young boy I would have played for and won trophies with my boyhood club Manchester United, proudly captained and played for my country over 100 times and lined up for some of the biggest clubs in the world, I would have told you it was a fantasy. I’m fortunate to have realised those dreams.

“To this day, one of my proudest achievements is captaining my country. I knew every time I wore the Three Lions shirt, I was not only following in a long line of great players, I was also representing every fan that cared passionately about their country.”

When asked by former Manchester United teammate Gary Neville, Beckham revealed that he wanted to go out on top. He also claimed that he was fortunate to play for big teams, and with great stars along the way.

“If you had said to me eight months ago that I’d have been playing in the French league, winning the French Cup and the league, finishing like this, I would have said absolutely no chance. I just feel now is the time.”

“I’ve been so lucky throughout my career, the fact that I’ve played for the clubs I’ve played for, the players I’ve played with, the trophies I’ve won, winning the French league here, it’s a good way to go out,” he said.

“It’s every footballers dream to go out on top form or by winning a trophy and it doesn’t happen that often.

“I just want people to see me as a hard-working footballer, someone who is passionate about the game and someone that, every time I stepped on the pitch, I have given everything I have.”

Being part of the title-winning PSG squad, Becks has now collected his 19th trophy, as well as winning 115 caps for England while being captain for six years.

Upon his announcement, Beckham also thanked his family for being supportive throughout his career.

“I wouldn’t have achieved what I have done today without my family,” he added. “I’m grateful for my parents’ sacrifice, which made me realise my dreams.

“I owe everything to Victoria [his wife] and the kids, who have given me the inspiration and support to play at the highest level for such a long period.”