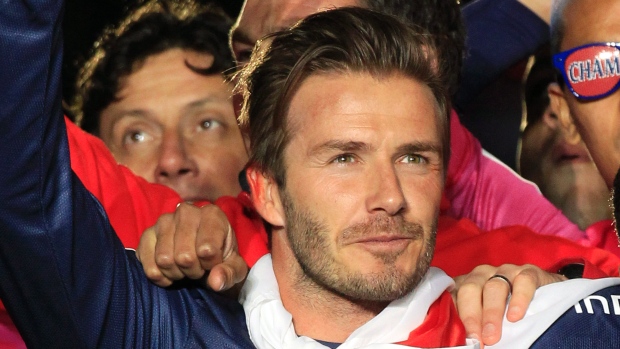 Beckham spent his last day with PSG as a gratified spectator.

Having stamped his mark and added his contribution to Paris Saint-Germain’s victorious season, retiring David Beckham spent his last day as professional player by watching his team from the sidelines.

On Sunday, the 38-year-old football icon became a mere spectator when visiting PSG downed Lorient 3-1 as curtains fell on Ligue 1.

Beckham took his seat on the PSG bench without fanfare.

Beckham announced that this season would be his last following league titles with Manchester United, Real Madrid, the Los Angeles Galaxy and new French champion PSG.

He shed tears as he was substituted in his final home game last weekend against Brest..

Against Lorient, Zlatan Ibrahimovic scored his 30th goal of the season — the most by a player in the league since Jean-Pierre Papin reached that mark for Marseille in the 1989-90 season.

Lyon finished third behind champions PSG and runners-up Marseille after Lisandro Lopez and Clement Grenier scored in a 2-0 win over Rennes, giving the team the last spot in Europe’s elite club competition next season.