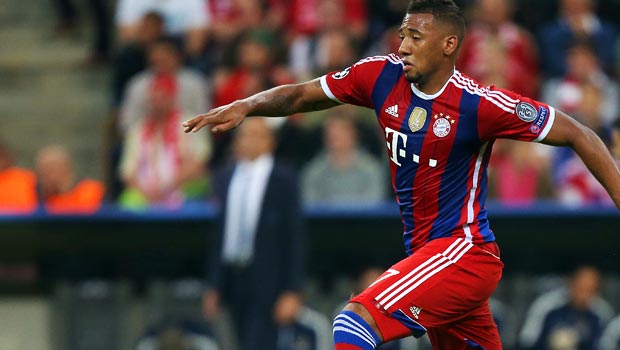 Bayern Munich defender Jerome Boateng says the team have set their sights on reaching the Champions League final this season after reaching the last eight on Wednesday.

The Bundesliga champions recovered from a goalless draw in Ukraine to thrash last-16 opponents Shakhtar Donetsk 7-0 at the Allianz Arena and book their place in the quarter-finals for the fourth year in a row.

Shakhtar played almost the entire game with 10 men after Olexandr Kucher received the competition’s quickest red card in history for a third-minute foul on Mario Gotze inside the penalty area.

Thomas Muller converted the resulting spot kick and it was one-way traffic from then on as Bayern produced six different scorers and had 74 percent possession.

Bayern goalkeeper Manuel Neuer made just one save throughout the 180 minutes of football against Shakhtar and the performance from Pep Guardiola’s side sent out a clear warning message to their rivals as they search for a first Champions League victory since 2013.

And Boateng, who got on the scoresheet himself with a close-range finish in the first half, insists their ambitions are to be in the final in the German capital’s Olympiastadion.

“We’re determined to make it to Berlin, although there’s still a long way to go. Let’s wait and see who we get in the quarters,” Boateng told the official Bayern website.

“It wasn’t an easy match. We made a superb start and obviously it did make the job simpler with our opponents down to 10 men.

“We wanted the second goal as soon as possible and we managed it before half-time. That was important and then we saw it through to the end really well.

“The margin of victory was deserved and it was a great game from the whole team.”

Bundesliga leaders Bayern return to domestic action this weekend with a trip to Werder Bremen, where they are 1.29 to secure all three points.