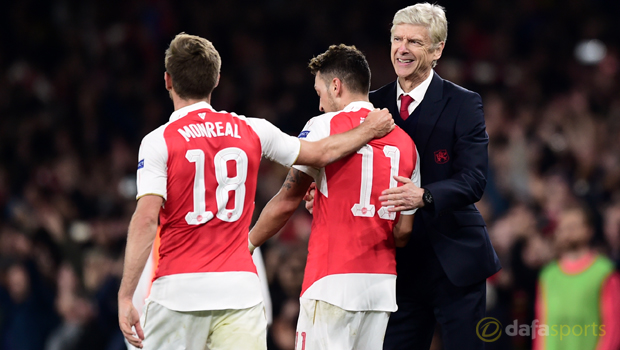 Arsene Wenger feels the Champions League victory over Bayern Munich should give belief to both his players and Arsenal supporters for the rest of this season.

Arsenal beat the Bundesliga champions 2-0 at the Emirates with late goals from Olivier Giroud and Mesut Ozil.

It keeps alive the Gunners hopes of qualification from Group F despite the fact they remain bottom of the table at the halfway stage, with three points from three games played.

Arsenal face a daunting trip to the Allianz Arena on November 4 but Wenger says everyone involved must take belief from the result against Pep Guardiola’s team.

“We had an absolute necessity to win and we did it in an intense, disciplined game,” he said. “It can strengthen our belief and the belief of fans.”

Arsenal face Everton on Saturday at the Emirates with a chance to go top of the Premier League, and will be bullish having ended Bayern’s 12-match winning sequence.

Neuer had brilliantly denied Walcott in the first half and Wenger paid tribute to Giroud for providing a different option to Arsenal.

“Give him some credit, it is not easy for Giroud,” said Wenger. “The focus and spirit he shows, he’s a winner.

“When it doesn’t work on the ground, he gives us options in the air. I like both Giroud and Walcott, it is just a question of making sure I use them in the right way.”

Arsenal are 8.00 to win Group F outright following their win over Bayern. Guardiola’s side meanwhile are 4.00 to win the Champions League this season, while Arsenal are 29.00.