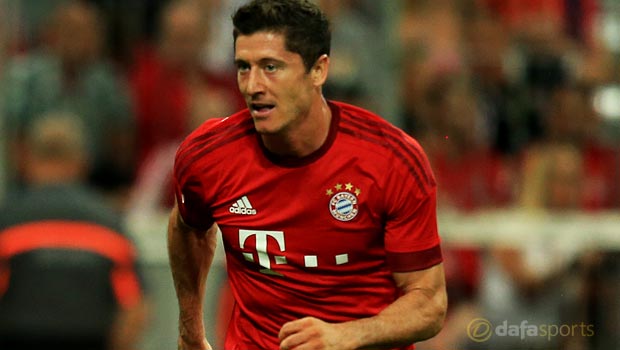 Robert Lewandowski admits he is already focused on Bayern Munich’s next match despite scoring five times in nine minutes against Wolfsburg.

The Bavarians went into Tuesday’s encounter with a perfect league record this term, having won five from five in the Bundesliga.

But they fell behind to a Daniel Caligiuri goal on 26 minutes at the Allianz Arena and trailed 1-0 at half-time.

Pep Guardiola took the decision to introduce Lewandowski at the start of the second period and what happened in the first 15 minutes will go down in the club’s folklore.

The Poland international netted the equaliser on 51 minutes before notching again just one minute later.

The 27-year-old bagged his third in the 55th minute and his fourth two minutes later, while keeping his best until last with a spectacular bicycle kick finish from the edge of the box to claim his fifth on the hour mark.

The speed of the goals sent the home faithful into raptures while the look of amazement on Guardiola’s face as the fifth goal sailed into the back of the net will live long in the memory.

Lewandowski was obviously delighted with his achievement but was quick to highlight its importance to the overall scheme of things.

“It was an amazing evening for me,” he wrote. “I entered the pitch to help the team. I did help and that is the most important for me.”

And the former Borussia Dortmund hit-man stressed that, after all the backslapping, it will be down to business with a trip to Mainz on Saturday.

“We play every three days and I must focus on the next game now,” he added. “Again, thank you to all my fans.”

Bayern are priced at 1.22 to make it seven consecutive top-flight wins with Mainz on offer at 12.00.