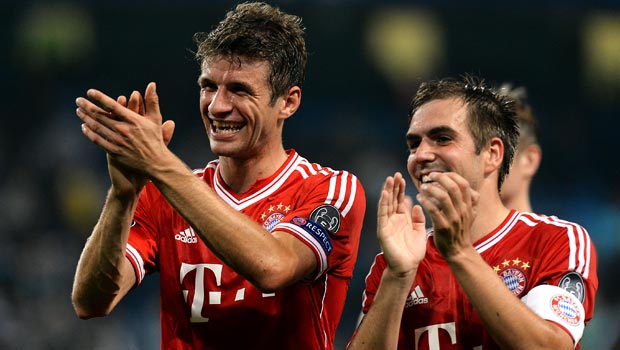 Club captain Lahm has put pen to paper on a new four-year contract with Bayern while Manchester United target Muller has put an end to speculation surrounding his future by signing a new five-year deal.

Bayern won the Bundesliga in record time last season and club chairman Karl-Heinz Rummenigge says the new deals are for some of the most important players in Pep Guardiola’s side.

“Both have remained faithful to this club right from the very start of their careers and they are also going to play an important role here in the future.

“We are very happy that both have decided to commit their long-term futures to Bayern Munich.”

Lahm, 30, and Muller, 24, both came through the youth system at Bayern and are currently in Brazil preparing for the World Cup with Germany.

“Now I hope that Philipp Lahm and Thomas Muller have a successful World Cup and I keep my fingers crossed for them and the Germany national team on the way to the title.”

Germany are among the favourites to win the World Cup and are priced at 7.20.

Joachim Low’s side open Group G against Portugal in Salvador on Monday June 16, with Lahm and Muller both expected to be in the starting line-up.