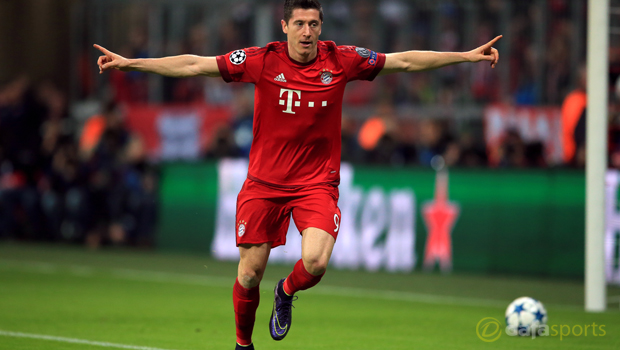 Bayern Munich insist they are relaxed about the future plans of striker Robert Lewandowski.

The Poland international has been in blistering form this season, scoring 36 goals in 39 games in all competitions.

The former Borussia Dortmund hitman has a contract with the Bundesliga champions until 2019 but the club are keen to secure a longer-term deal.

Bayern have already tied down Thomas Muller, Jerome Boateng, Javi Martinez and David Alaba on contracts until 2021 this season but Lewandowski has yet to commit.

Negotiations are ongoing and recent reports in the German press had speculated that a deal was close to being agreed.

With boss Pep Guardiola leaving Allianz-Arena this summer, rumours also linked Lewandowski with a potential move to follow the Spaniard to Manchester City.

One of Lewandowski’s agents was also spotted attending a Real Madrid game, prompting speculation the player could be destined for the Bernabeu this summer.

Bayern Munich CEO Karl-Heinz Rummenigge and sporting executive Matthias Sammer have both insisted the club are not under any pressure regarding the 27-year-old’s future.

Rummenigge is keen to avoid a tug-of-war with agents.

“I won’t comment on contracts because we are not joining the agent’s game,” Rummenigge told reporters. “Looking at the contract lengths, we can look to the future relaxed.”

Sammer was also at pains to reassure people Bayern are not panicking over the negotiations with Lewandowski.

“I am optimistic because FC Bayern is a good option,” he told Sky Deutschland. “We should be relaxed about this. To the best of my knowledge no decision has been made.”

Bayern are 3.50 to win the Champions League this season while they are 1.17 to defeat Benfica in their quarter-final first leg on Tuesday in Munich.