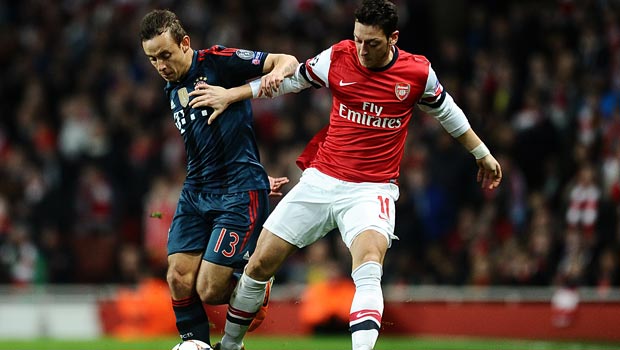 Arsenal must hope for a miracle if they are to progress in the Champions League, with Tuesday’s opponents Bayern Munich holding a 2-0 lead after the first leg of the last-16 encounter.

Arsenal were comfortably beaten by the reigning champions when the Bundesliga outfit turned up at the Emirates last month and, given the German team’s form, there can surely only be one outcome on Tuesday.

Bayern registered a record 16th successive Bundesliga victory at the weekend when they won 6-1 at Wolfsburg, with Arjen Robben laying on a couple of goals.

The former Chelsea winger was a thorn in Arsenal’s side in the first leg of their Champions League tie, winning a penalty for the first goal, and is sure to be a source of trouble for the Gunners’ defence on Tuesday.

The Dutchman said: “It’s going to be a very tough one.

“We got a very good result in London, 2-0, but it isn’t over yet and I think everybody realises as well that we have to play one game at our top level, then hopefully we reach the quarter-finals.”

Arsenal can take heart from Saturday’s 4-1 FA Cup quarter-final victory over Everton, but the way that Pep Guardiola has his side playing at present, few will expect anything less than another home victory.

Guardiola has a full squad to choose from for a match that kicks off at 7.45 UK time.