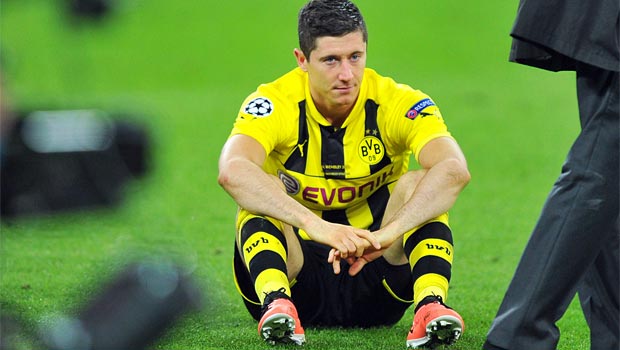 The worst kept secret in football has now been confirmed as Bayern Munich released a statement that they had completed the signing of Robert Lewandowski from next season.

There had of course been strong speculation that the Bavarian giants would raid Borussia Dortmund for a second time last summer and follow up the signing of Mario Gotze with the capture of Lewandowksi.

That turned out not to be the case as Dortmund resisted any possible attempts to effectively strengthen their immediate rivals in the Bundesliga by insisting the Poland international would not be leaving before his contract expires.

That happens at the end of the season and having failed to tempt him to commit his future, Die Borussen have had to accept that one of their star assets’ futures was out of their hands.

Following a stunning performance against Real Madrid in the semi-finals of the Champions League last term, there had been suggestions that the Spanish giants – amongst others – would rival Bayern’s determination to sign the Poland international.

However, Lewandowski was already seemingly set to move to the Allianz Arena and now the transfer window has opened, the news that everyone was all too aware of has now been made official.

A statement on Bayern’s Twitter feed said: “FCBayern have signed Robert Lewandowski (25)! The striker has signed a 5-year contract until 2019.”

Chelsea and Manchester United had also been reported to be tracking the 25-year-old but will now have to turn their attentions elsewhere, while Bayern are obviously delighted to have strengthened their hand at the expense of their biggest domestic rivals.

Chairman Karl-Heinz Rummenigge told the club’s official website: “We are very pleased that this transfer is successful.

“Robert Lewandowski is one of the world’s best strikers, he will strengthen the squad of FC Bayern and give us a boost.

“We are very pleased that today, from both sides, a five-year contract was signed until 2019.”

What effect this has on the rest of the season remains to be seen but Bayern already look a strong bet to defend their Bundesliga crown as they hold a seven-point advantage over Bayer Leverkusen with a game in hand, while Dortmund – with Lewandowski in their ranks – are languishing in fourth place, already 12 points off the pace.