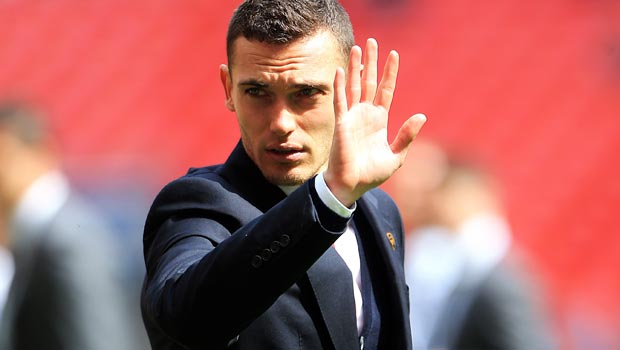 Barcelona have stepped up their pursuit of Arsenal defender Thomas Vermaelen and lodged a £10million bid, according to reports.

Vermaelen continues to be linked with a move away from the Emirates Stadium after a summer of speculation regarding his future.

The Belgian defender is wanted by both Barcelona and Manchester United but it is the Catalan club which has seemingly made the first move.

Reports on Wednesday say Barcelona have made a seven-figure offer for the player in an attempt to test the water in north London.

He has reportedly been told he can leave Arsenal after failing to agree terms over a new contract but it remains to be seen if the Gunners will accept the bid from Spain.

Arsene Wenger is believed to rate the versatile defender at closer to £12million but could be forced to sell with the 28-year-old entering the final year of his contract at Arsenal.

Wenger has also told Vermaelen he will not be guaranteed first-team football at the Emirates this season, with Per Mertesacker and Laurent Koscielny his preferred centre-back pairing.

The La Liga giants have also been linked with Borussia Dortmund defender Mats Hummels after he played a starring role for Germany in their victorious World Cup campaign this summer and Liverpool’s Daniel Agger.

Reports in England, meanwhile, claim Arsenal have set their sights on a surprise move for Hummels, should Vermaelen join Barca or Manchester United in August.

Barcelona are priced at 2.10 to win La Liga this season while Arsenal are 6.30 to lift the Premier League trophy.