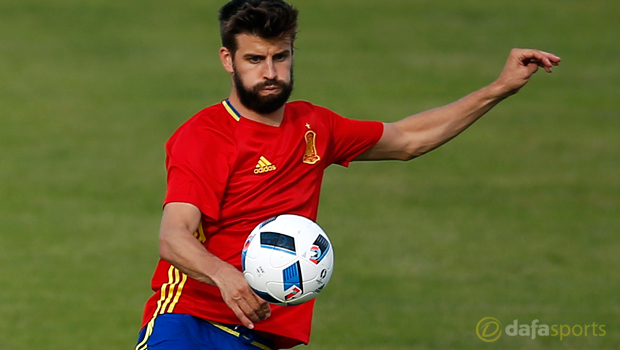 Barcelona defender Gerard Pique insists Spain aren’t favourites to win Euro 2016 but admitted that was also the case when they triumphed at Euro 2008 and the 2010 World Cup.

Spain, who are priced at 5.50 to win the European Championship, are looking to bounce back in France following a poor showing at the 2014 World Cup in Brazil.

Vicente del Bosque’s side limped out at the group stage two years ago in South America as they failed to defend their crown.

La Roja will be looking to send out a message as they bid to claim the European title for a third successive time.

However, Pique has stressed that Spain are not set to enter the showpiece event as the clear favourites but feels it can work to their advantage.

The former Manchester United man was involved in Tuesday’s shock 1-0 defeat to Georgia as Spain missed out on the chance to build momentum ahead of their opening group match against the Czech Republic on June 13.

Pique insists the optimism will return if they make a positive start in France.

“Winning a third Euros would be something unique but we’re not favourites,” said Pique, “[The defeat] demonstrated that it was an accident but it also shows there are teams like France and Germany who can be better.

But we weren’t favourites in Euro 2008 or World Cup 2010 and we have a very good team. “I think we’re a high level: the generation coming now is very good, with a lot of very talented young people, and we hope to do a good job.

Out of 100 matches you’ll lose one, and that was [against Georgia]. Accept it, see where we made mistakes, and move forward.

“I understand that after a defeat such as that there’s going to be discussion and criticism. We start [the Euros] on Monday and a victory against the Czech Republic is going to change everything and people are going to be optimistic.”