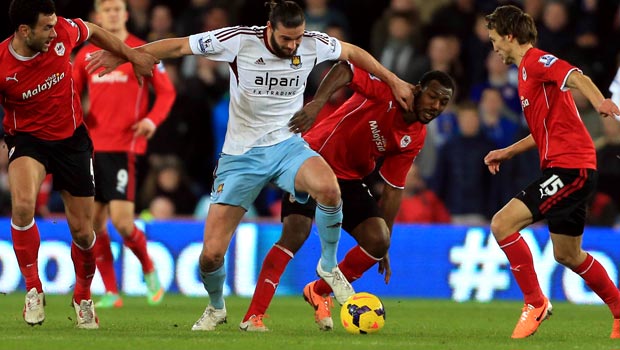 West Ham boss Sam Allardyce has confirmed that he has taken a gamble by naming striker Andy Carroll in his squad for the first time this season for their “massive” game at Cardiff City.

The influential 25-year-old England international has been sidelined with a foot injury picked up in the summer shortly after signing a permanent six-year deal at Upton Park for a club record £15million.

Carroll’s absence has been felt by the Hammers as they have struggled for goals, with just 19 scored in 20 games, and that has impacted on results as they sit second-bottom in the Premier League, three points adrift of safety.

Allardyce is under pressure to secure a result against the 17th-placed Bluebirds after watching his side follow up a 5-0 FA Cup third-round exit at Nottingham Forest last Sunday with a 6-0 midweek mauling in the Capital One Cup semi-final first leg at Manchester City.

And, while he accepts that Carroll’s return to the first-team fold is slightly premature, he hopes his return can spark the rest of the team into life and help them pick up three vital points.

On Carroll, who scored seven goals in 24 games for West Ham last season while on loan from Liverpool, Allardyce said: “Ideally we would like to progress it a little slower but based on where we are it may be a calculated risk we’re prepared to take.”

However defensively, where the club have struggled dramatically in the past six days, full-back Joey O’Brien has joined centre-backs Winston Reid and James Collins on the injured list, but James Tomkins is in the squad.

The Hammers have lost their last six games on the road, but they do have the edge over Cardiff in recent meetings, winning the last four in the league without conceding a goal and they also knocked them out of this season’s Capital One Cup.