Manchester City: Away form a concern for boss 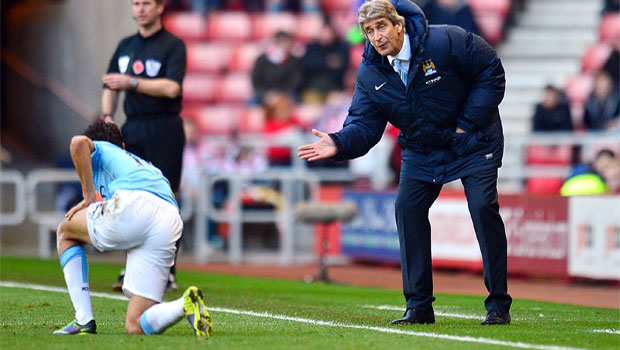 Manchester City boss Manuel Pellegrini admits his side’s away form is in serious danger of derailing their title push this season.

City slipped to a shock 1-0 defeat at struggling Sunderland on Sunday afternoon to leave them sitting in eighth place in the Premier League, six points behind leaders Arsenal.

City have looked strong at home and crushed Norwich 7-0 last week, but their away form has been very poor when picking up just four points from a possible 18, and Pellegrini admits he is worried.

“I am concerned because we are losing too many points away and, of course, that’s very difficult if you don’t win away to try to fight for the Premier League,” he said.

“But I don’t think we are playing badly, so we must have a reaction, we must improve to make sure we are going to win.”

City dominated large periods of the game but Sunderland took all three points as Phil Bardsley fired home following a rare attack from the home side.

City now have the international break to regroup and Pellegrini is expecting his players to bounce back when they take on Tottenham at home on Sunday November 24.

“The reaction is very similar to the other games that we have lost away,” he added. “It’s incredible the way we lost this match.

“Sunderland played really well also defending. The team is not in a good position, so I understand the way they played.

“But they had just one shot on our goal. We had the possession, we had the chances and we didn’t score.”