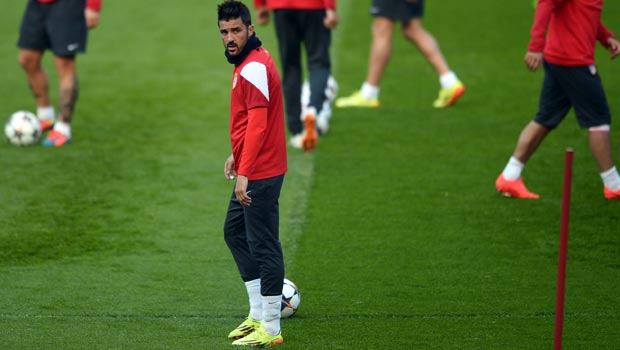 David Villa has confirmed the news that he will be leaving Atletico Madrid this summer to try his hand in America as he closes in on a move to New York City FC.

The 32-year-old will leave Spain as a champion having helped Atletico win their first La Liga title since 1996, narrowly missing out on a famous double having lost to Real Madrid in the Champions League final after extra-time.

Villa has won just about everything there is to win in Spain in spells at Real Zaragoza, Valencia and Barcelona previously, but now feels the time is right to seek a new challenge.

Although he has not finalised a move yet, he is nearing a completion on a move to New York City – who do not join the MLS line-up until March 2015 – after reportedly undertaking a medical at Manchester City.

Villa has revealed that Los Colchoneros were keen for him to remain at the Vicente Calderon but insists he could not turn down the opportunity given to him in America.

“(I am) excited with this important project, for me, and for my family, personally and professionally,” he told Atleti’s official website.

“And I am very excited to start a new challenge, which is what I have tried along my whole career, and I think this is a really important one for my life in general.

“(I want to) thank all the Atletico aficionados, everyone from the club who wanted me to stay here,” he added.

“Especially ‘Cholo’ (Diego Simeone) and his staff, who transmitted that they wish me to stay in the team.

“And obviously I thank Enrique and Miguel Angel, who as well offered me to stay. But as I said before, this is something you can’t refuse, a great project that I must accept.”

Villa is of course Spain’s all-time leading goalscorer and has been included in the final 23-man World Cup squad, with the likes of Fernando Llorente and Alvaro Negredo missing out, as they look to defend the title they won four years ago – for which they are priced at 7.50.