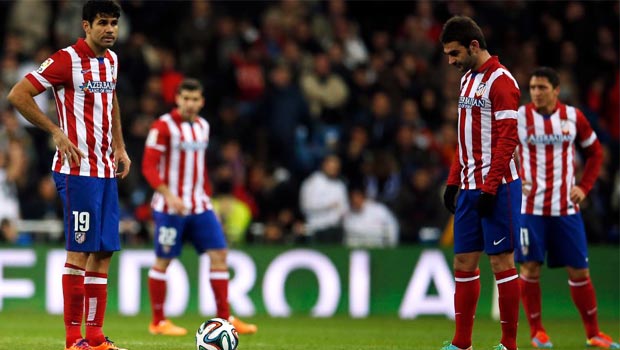 Atletico Madrid were replaced at the top of the La Liga table by Real Madrid after a disappointing 2-0 defeat at Almeria.

The Los Colchoneros were beaten for only the second time this season by two late goals on Saturday night. Verza’s cross missed everyone in the box with ten minutes remaining. Atletico keeper Dani Aranzubia should have done better but the ball looped over his head and into the net.

Aranzubia was then given a straight red card for a foul on Sundy Zongo in the box and Verza took his opportunity from the penalty spot to make it 2-0.

Diego Simeone also has injury worries ahead of the Copa del Rey clash against Real Madrid after Tiago was stretchered off after a strong challenge from Helder Barbosa.

Rivals Real Madrid moved top on goal difference thanks to their 4-2 victory over Villarreal earlier in the evening.

Carlo Ancelotti’s side opened the scoring through Gareth Bale when he intercepted the ball on the edge of the box to chip Sergio Asenjo in the Villarreal goal.

Karim Benzema doubled their advantage thanks to more good play from Bale, but the Yellow Submarine did manage to pull one back through Mario.

Madrid went 3-1 up when Jese found space in the box and his curling shot managed to find the corner, but Villarreal refused to go down without a fight. Giovani dos Santos showed his ability once again on the big stage when he curled the ball in from 25 yards from a free-kick but it was to no avail as Benzema wrapped up the 4-2 victory minutes later.

A win for Barcelona later on Sunday will see all three sides sit at the top of La Liga on 57 points, but Atletico’s advantage seems to be slipping due to their lack of numbers.

They will now focus on Tuesday’s Copa del Rey semi-final clash against Real Madrid, and the latter are priced at 2.62 to win as they look to take advantage of Atletico’s poor recent form. Real lead the tie 3-0 following last week’s first leg win.