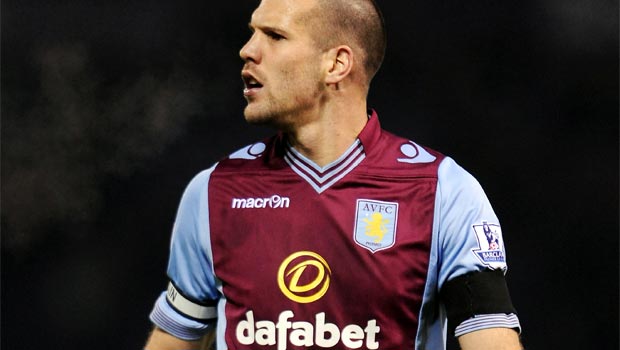 New Aston Villa signing Philippe Senderos says he is ‘desperate’ for fellow defender Ron Vlaar to remain at the club and wants the Dutchman to decide against a move away.

The Holland international was one of the stand-out performers at the World Cup in Brazil this summer as the 29-year-old helped the national side to a third place finish in the tournament.

Throughout the summer there have been reports linking the defender with a move away from Villa Park, with Manchester United one of the most notable clubs being linked.

There is yet to be any official bids received for Vlaar but, after the Red Devils opening day loss to Swansea on Saturday, manager Louis van Gaal may decide to make an offer.

Manchester United are in desperate need of some reinforcements at the back following the departures of Rio Ferdinand and Nemanja Vidic, with Phil Jones and Chris Smalling handed the responsibility of leading the lines.

Senderos is hoping that the Dutch centre-back will stay at the club for at least another season after a good start to the new campaign.

“It would be brilliant if he can stay. I think the club are trying everything they can to keep him and the fact he’s seen the team do well today he might think he should stay,” he said.

“He’s our captain and a very important player.”

Aston Villa are next in action against Newcastle United, who are priced at 5.26 to defeat Manchester City at St James’ Park on Sunday, and after the opening day victory over Stoke, Paul Lambert’s men will head into the match with huge confidence to claim back-to-back wins.