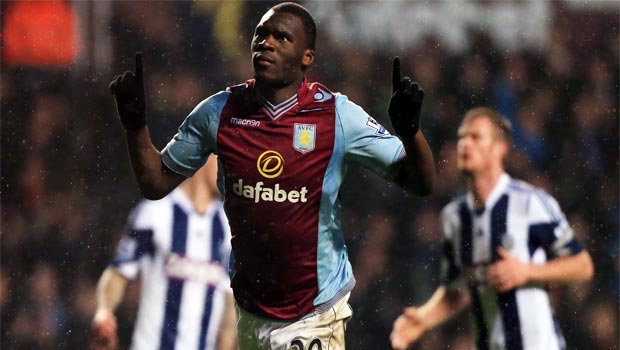 Having come out on top in a classic derby encounter with West Bromich Albion on Wednesday, Aston Villa boss Paul Lambert feels the club’s star striker Christian Benteke is getting back to his best.

The Belgian international scored the winner from the penalty spot as Villa came from 2-0 to secure a 4-3 victory over their West Midlands rivals.

A return to form for Benteke could not have come soon enough after the 23-year-old failed to live up to the incredibly high standards he set last season in the Premier League.

Having gone almost four months without a goal, the Villa talisman has now netted in his last three consecutive outings and following a frantic game against the Baggies, Lambert was singing Benteke’s praises.

After the thriller against Albion, Lambert said: “It’s not great for the heart, to go down 2-0 in a derby. All credit to the team, the response was fantastic.

“With derby games, it doesn’t matter where you are in the table, they’re really unpredictable.

“He [Christian Benteke] did the same last season with the incredible scoring run. His general game is getting back to what it was.”

There was plenty of pressure on Lambert’s shoulders a few months ago but a recent change in fortunes has seen the club climb to 10th place in the table and more importantly eight points away from the relegation zone.

Villa will now have switched their focus to their next Premier League outing when they make the trip to Merseyside to face Everton on Saturday.

Benteke will be looking to extend his consecutive goalscoring record to four games this weekend, with Villa at 7.83 to secure the win at Goodison Park.