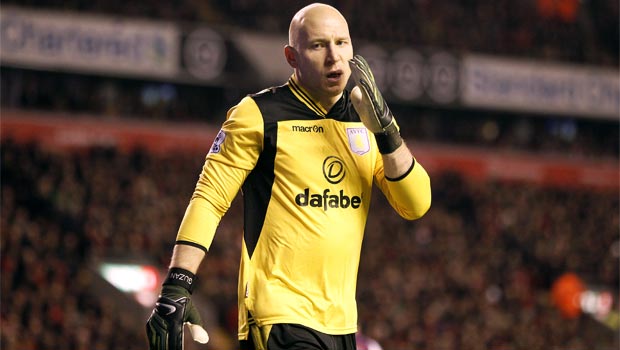 Aston Villa keeper Brad Guzan feels the battle against relegation could be one of the most exciting in recent years in the Premier League, but he is keen for his side to pull away from danger as quickly as possible.

Guzan admits such a close fight is exciting for the neutral, but he is desperate for Villa to move clear of the drop zone as quickly as possible.

“It’s exciting for everyone watching,” Guzan told the Birmingham Mail. “One week it’s this team or that team, the next it’s somebody else [in the bottom three]. That’s why the Premier League is the best in the world.”

Villa, who travel to Cardiff on Tuesday, had 21 points on the board at this stage last season and were 19th in the standings, compared with the 27 they have managed this term.

Guzan insists the team is improving but he is desperate for his side to bounce back from a disappointing 2-0 defeat at home to West Ham last time out when they travel to Wales on Tuesday.

The American keeper added: “It’s exciting to be a part of that and hopefully now we can get a result at Cardiff to push us up the table a bit. As a player, it’s pressure week in, week out. It’s how you deal with that. It’s an opportunity for us to rise to the occasion.

“If you look at where we are in the table, regardless of points from the bottom or top, we’re better off than we were last year. We’ve also got more experience in the team now.

“It was hugely frustrating because West Ham was a game we felt we should have won. It’s not a result we wanted, but the positive is we get the chance to go again against Cardiff.”

Villa can be backed at 2.88 to come away from Cardiff with all three points, having managed four points from their last three away games in the Premier League.