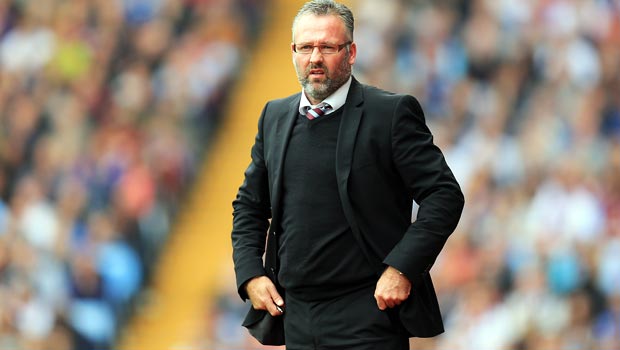 Aston Villa boss Paul Lambert is not worried about the form of his team following Monday’s defeat at QPR and is confident they will rediscover the goal scoring touch this weekend.

Villa suffered a 2-0 reverse at Loftus Road last night to stretch their losing streak in the Premier League to five games.

More of a concern for Lambert is that his men have not scored a goal in that period and have played over eight hours of football without finding the net.

It leaves the Villains hovering two points above the relegation zone in 15th position and while Lambert admits they must improve in attack, he is finding flaws throughout the team.

“The two goals we lost were really poor – we defended badly,” the Scot said. “I think that game is the most we have had of the ball, possession-wise, but that is why I’m never one for stats – you’ve got to score.

“The main stat is putting the ball in the net and keeping it out. We have got to be more clinical in the last third of the pitch but the two goals are disappointing because we had most of the ball.”

However Lambert is refusing to panic at this stage of the season and insists the players will be raring to go when they take on Tottenham Hotspur at Villa Park on Sunday.

When asked about their lack of goals, he said: “I tend not to get them down on that.

“They will come out of the traps on Sunday and I know we are going to be alright in that department because when (Christian) Benteke gets up to speed and, with (Gabriel) Agbonlahor, (Andreas) Weimann, (Charles) N’Zogbia and (Darren) Bent, there are guys there with goals in them and it will happen.

“My main concern tonight was we had that much of the ball that we had to score with it, but you have to defend when you are on top.”