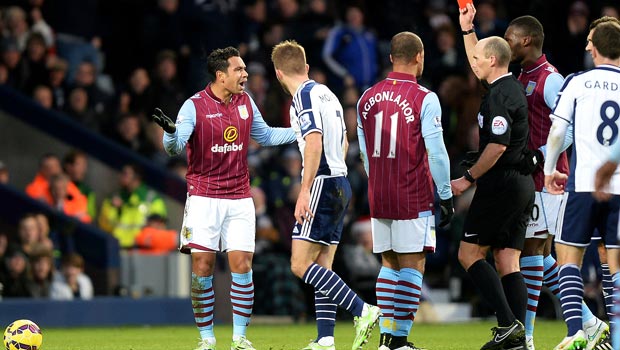 Aston Villa boss Paul Lambert admitted that he could see why Mike Dean sent off Kieran Richardson in the 1-0 loss to West Brom, but insisted the midfielder is not “malicious”.

Villa travelled to take on their West Midlands rivals on Saturday looking to take advantage of their recent slide down the table.

However, with the fixture only 22 minutes old, Richardson lunged into a challenge with Stephane Sessegnon and failed to get to the ball.

Dean felt he was left with no other option but to pull out a straight red card for the midfielder and reduce the travelling side to ten men.

Ultimately the sending off handed the control to the Baggies and they eventually found a way through their opponents rear-guard with a strike from Craig Gardner on 72 minutes.

Lambert defended the intent of his man at full time, but conceded that the referee had every right to dip into his pocket.

He said: I can see why the ref sent Kieran off, but he’s not a malicious footballer.

“I think with his second touch he’s over-hit it. In the modern-day game if you raise your studs, you can see why the ref will give a card.

“His enthusiasm to win the ball back probably got him sent off.”

Despite the loss, which ended a run of five games unbeaten, Lambert insisted that he was happy with the performance from his squad.

He added: “I thought we were excellent, we started the game great. We looked really good.

“It was a big compliment for the team because for 70-odd minutes you wouldn’t have known we had 10 men.

“I think there’s a way to get beaten in football, so I’m disappointed to lose but not disappointed with the way we played.”