Ashley Williams to finish at Swansea 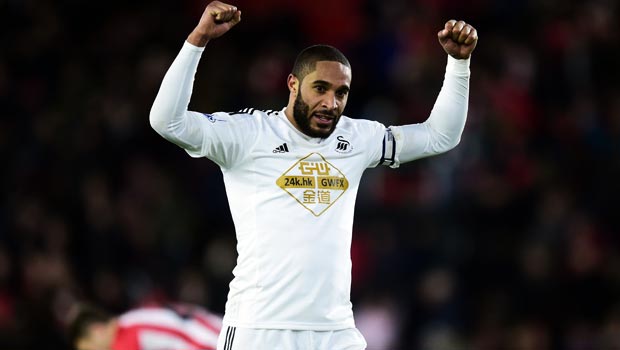 Ashley Williams has ended any speculation linking him with a move away from the Liberty Stadium with the defender saying he “can’t see himself playing for anyone else”.

The 30-year-old, who joined the Welsh club back in 2008 from Stockport County after his initial loan spell was made permanent for £400,000, is a vital member of the first team and is arguably one of the best centre-backs in the Premier League.

The defender was crucial for City in their promotion from the Championship back in 2010-11 as the Swans defeated Reading 4-2 in the play-off final, with former winger Scott Sinclair grabbing a hat-trick in the match.

Since making it into the Premier League, Williams has made close to 150 appearances in the top flight and there has been huge interest in his services from a number of rival clubs.

Both Arsenal and Liverpool were linked with the defender last season and Sunderland actually had a £4million bid rejected as the Swans looked to hold on to their prized asset.

Williams ended speculation about his future by signing a three-year contract extension in July 2014 and the Wales international, who will win his 50th cap against Israel on Saturday, has told boss Garry Monk he does not want to leave the Liberty.

“I can’t see myself playing for anyone else to be perfectly honest,” he said. “I’m very comfortable here in the city, I love the club. I know it, the way it works and it knows me.

“And I don’t have any other thoughts of any other team in the Premier League to be honest. All I care about is doing the best for this team.”

Swansea are back in Premier League action on April 4 against struggling Hull and the Swans are favourites at 1.95 while City are 3.99.