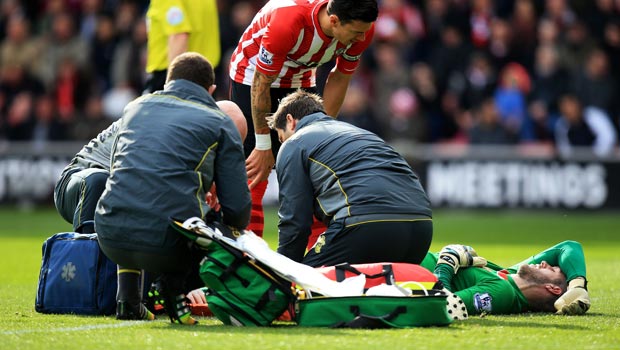 Southampton have been dealt a massive blow after the club confirmed that Fraser Forster will miss the remainder of the season after undergoing knee surgery.

The goalkeeper was forced off in the recent Premier League game against Burnley after feeling pain in his knee when taking a routine kick from inside his area.

The 27-year-old was immediately withdrawn from the England squad to face Lithuania and Italy as the club sent the shot-stopper for a further examination to find out the full extent of the injury.

It was bad news for the Saints and Forster as a statement confirmed the England international will not play again this season, with a return date yet to be confirmed.

“Southampton Football Club can confirm that Fraser Forster has successfully undergone surgery on the knee injury he suffered during Saturday’s win over Burnley,” a statement from the club read.

“A scan on Monday showed that the goalkeeper had suffered damage to his left patellar tendon, with the injury and resultant surgery ruling him out for the remainder of this season.

“A longer-term prediction of when Forster will return to action will be made following further assessment once the effects of his operation have settled down.”

Forster has been outstanding for Southampton this season and the former Newcastle goalkeeper has kept the most clean sheets this term with 13, two more than Ben Foster, Simon Mignolet and Lukasz Fabianski.

He is also a part of the meanest defence in the Premier League with just 21 goals conceded. It is likely Kelvin Davis will take over the number one duties.

Southampton are back in Premier League action on April 4 when they travel to Everton and the visitors are 2.89 to pick up the win while the Toffees are slight favourites at 2.55.