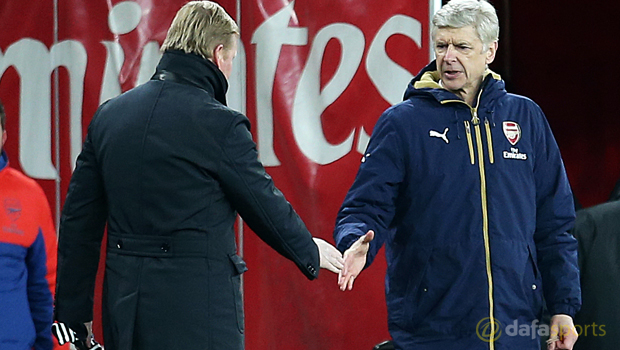 Arsene Wenger watched his Arsenal side fail to score for a third league game in succession and afterwards conceded that poor finishing means they are playing catch-up in the title race.

It is the first time in seven years that Arsenal have drawn three Premier League blanks on the trot, but the Gunners had numerous chances to break the deadlock against Southampton at the Emirates Stadium.

Saints stopper Fraser Forster was inspired between the posts although Wenger felt his own team’s lack of clinical finishing was more of a problem in the 0-0 draw.

“Our finishing is very bad at the moment – we have played three league games now without scoring a goal. In all those three games we had chances that we didn’t take. At that level it’s important.”

With difficult away days in the league looming at Manchester United, Tottenham and Everton, Wenger knows Arsenal have given themselves an uphill climb if they want to get back in the title race.

“We have to catch that back and we have a difficult programme, especially away from home,” Wenger told the club’s official website. “We need to respond quickly away from home now.”

Leicester travel to the Etihad Stadium on Saturday for a top-two clash with Man City but, according to Wenger, now is not the time for Arsenal to start looking at other results.

“We have to win football games. We have to focus on how to respond quickly and win our next game, that’s all we can do,” he added.

Man City are 2.20 to win the Premier League title, Arsenal are at 3.75 and current surprise leaders Leicester are 6.00.