Antonio Conte: Only winners are remembered 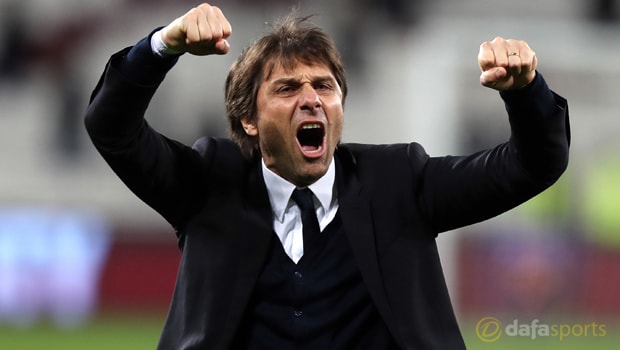 Chelsea must complete the job and win the Premier League title to be remembered as a decent team, according to manager Antonio Conte.

The Blues are well on course to win the title for the second time in three years and give Conte the ultimate achievement at his first attempt in English football.

The former Juventus and Italy boss has cautioned his players however, insisting they must see the job out to secure their status.

“All my players are playing very well and deserve the best. But it’s important in this case to finish the right way and try to win.

Only if you win will people remember you,” he said ahead of Monday’s London derby at West Ham.

The Blues have drawn their last two away games 1-1 at Liverpool and Burnley, and Tottenham trimmed their lead to seven points by beating Everton on Sunday.

Conte is adamant that his team are going to be ready should West Ham front up for a physical battle at the London Stadium.

“This game against West Ham, for us, is very important,” Conte said. “In the last away game, the way we played against Burnley, we drew. They played very physical football against us.

“Maybe it can happen, the same, against West Ham on Monday. But for this reason we are preparing for this type of situation. It will be a really tough game.”

Conte has also called on fans of both teams to create the right sort of atmosphere after crowd disturbances marred West Ham’s EFL Cup win over Chelsea earlier in the season.