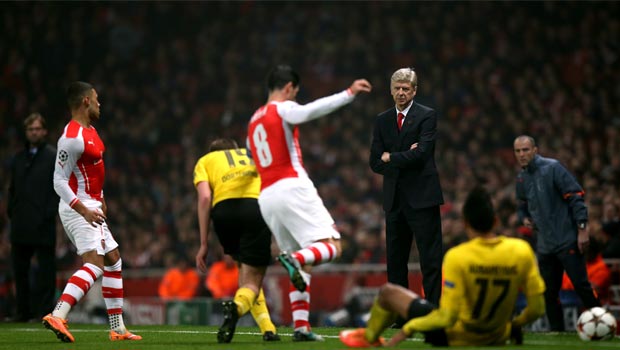 Arsenal may have secured their place in the knockout stages of the Champions League after a 2-0 win over Borussia Dortmund on Wednesday, but the club’s injury curse has struck again.

The Gunners took the lead inside the first two minutes of the match after Yaya Sango slotted home from close range as the striker grabbed his first goal for the club.

Talisman Alexis Sanchez continued his impressive form since arriving this summer as the forward curled in a fantastic strike in the second half to ensure Arsenal got the crucial victory.

The result has guaranteed the Gunners’ qualification from the group and they actually have a chance of topping it with one game left. It may have been all smiles on the pitch as the victory banished the memories of the 2-1 defeat to Manchester United recently in the Premier League, but Wenger has two new injury worries.

Spanish midfielder Mikel Arteta suffered a calf problem in the second half and was forced off whilst Sanogo was replaced because of a hamstring issue.

Wenger admitted it was “difficult to take on the chin at the moment” with the Frenchman saying “you go in to many games and need everyone available”.

The injury list is growing at the Emirates with England international Jack Wilshere set to see a specialist due to an ankle problem whilst Wojciech Szczesny, Theo Walcott, Mathieu Debuchy and Mesut Ozil are all sidelined.

It is doubtful whether any of those players will be fit enough for the Premier League encounter on Saturday at West Brom and it may force Wenger to start Olivier Giroud.

The French striker has only recently returned to competitive action but did score in the 2-1 loss to United after coming on as a substitute.

Arsenal are still big favourites to clinch all three points away from home at 1.88, with West Brom big outsiders at 4.40.