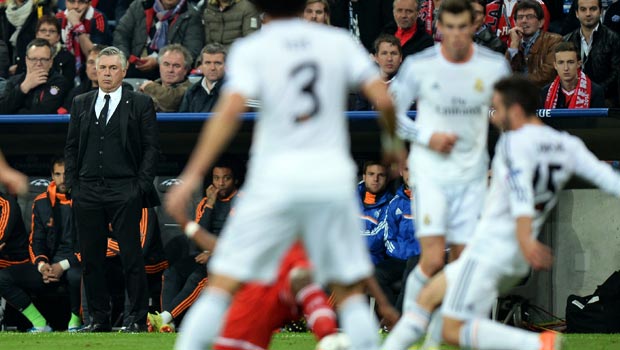 Real Madrid coach Carlo Ancelotti has blamed “physical tiredness” for his players’ inability to steal a march in the race for La Liga after they were held to a 2-2 draw against Valencia on Sunday.

Los Blancos went into the game at Estadio Santiago Bernabeu knowing a win would have left the destination of the title in their own hands after Barcelona were held to a 2-2 draw by Getafe on Saturday night and leaders Atletico Madrid lost 2-0 at Levante earlier on Sunday.

However, they needed a stunning late goal from Cristiano Ronaldo to rescue a point against Los Che which now leaves city rivals Atletico knowing four points from their final two matches – at home to Malaga on Sunday and away to Barcelona on May 18 – will be enough to clinch the title.

Ancelotti felt that his side’s Champions League exertions in their 4-0 win at Bayern Munich and Atletico’s success at Chelsea in the midweek played a part in their inability to secure maximum points at the weekend.

“I think it was physical tiredness more than anything,” he said.

“You saw Atletico and Chelsea have had the same problem; it is difficult to give your maximum physically days after the intensity of a Champions League semi-final.”

The capital giants can jump above second-placed Barca and move to within two points of Atletico with a win at Real Valladolid on Wednesday before a trip to Celta Vigo and a visit of Espanyol to come. And Ancelotti claims they must win all three to have any chance of winning the title.

“The team is not happy and that is normal because we tried to win until the end, but we will have the same desire and will to fight until the last game,” he added.

“To have a chance we need to win all three games and it won’t be easy because we play two away from home against teams that are fighting themselves.”