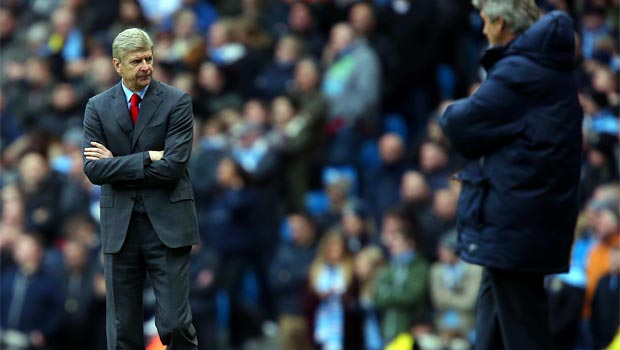 Arsenal boss Arsene Wenger believes title rivals Manchester City do have a number of weaknesses and believes they will falter in the run-in.

City currently sit top of the Premier League table and are in imperious form, avoiding defeat in their last 21 games in all competitions, while they have the perfect chance to extend their advantage over another of their main adversaries when they host Chelsea on Monday.

However, the Blues are the only one of the teams challenging for the title that they will host from now until the end of the campaign, with Manuel Pellegrini’s men still to visit Liverpool, Manchester United and of course the Gunners.

Arsenal, who are priced at 31.00 to win this season’s Champions League, also face a number of tricky trips on the road but have already played at the Etihad this term and host their rivals at the end of March.

With so much more to play for in the title race, Wenger says he expects the Citizens’ tough fixture list to cost them dear over the next few months and believes his side can take advantage.

“Man City are the team of the moment, so everybody goes to definite conclusions,” the Frenchman said. “I don’t deny their strength, quality and the exceptional players they have, but let’s not forget they have lost four away games, so they must have some vulnerability.”

“They are top quality, but it is an even bigger target and scalp for us to get in front of them. It would be absolutely fantastic and I think we can do it.”

First up for Arsenal in their title bid is a tricky looking clash against resurgent Crystal Palace on Sunday but the Gunners are the comfortable 1.22 favourites to claim their seventh win in eight matches, while the Eagles are priced at 13.97 to take the win with the draw at 6.30.