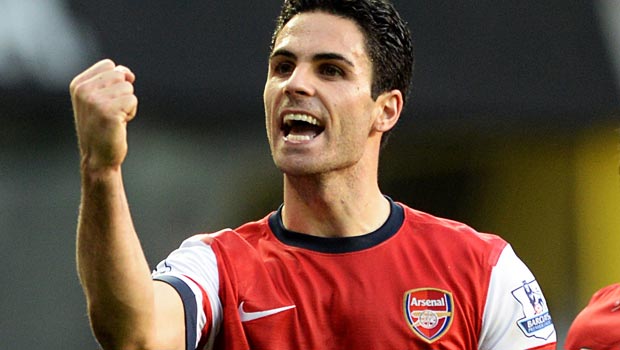 Arsenal midfielder Mikel Arteta is hoping his team can show the fans a “big reaction” when they take on Swansea on Tuesday.

The Gunners, 1.47 to beat Swansea, were hammered 6-0 on Saturday by Chelsea, in a defeat that seriously dented their hopes of pushing for the Premier League title.

Arteta has apologised to the club’s supporters for their performance in the embarrassing defeat, which was made even tougher when referee Andre Marriner sent off Kieran Gibbs in a case of mistaken identity.

Gibbs was adjudged to have handled the ball in the area, when in fact Alex Oxlade-Chamerlain was the guilty man as Arsenal boss Arsene Wenger endured a miserable afternoon.

Wenger’s side will have the chance to make up for the defeat when they take on Swansea at the Emirates.

The Swans, 6.59 to beat Arsenal, will come into the contest also looking to bounce back from a defeat, after they lost 3-2 to Everton on Saturday.

Arteta is confident his side have the ability and character to return to winning ways, starting with Swansea.

“I am expecting a big reaction against Swansea because Saturday was not good enough for this football club,” he said.

“I promise everyone that we have the hunger to put it right. We have an opportunity again at home and we just need to bounce back. The good thing is we have a lot of things to play for and we have always reacted to disappointments and difficult moments, but this one is a really hard one to take. It was a massive game for us and for me it is unacceptable.

“We just disrupted the good season we were having. I don’t know what else to say apart from sorry to everyone at the club and the fans, and we promise that we will try hard to put that right.”