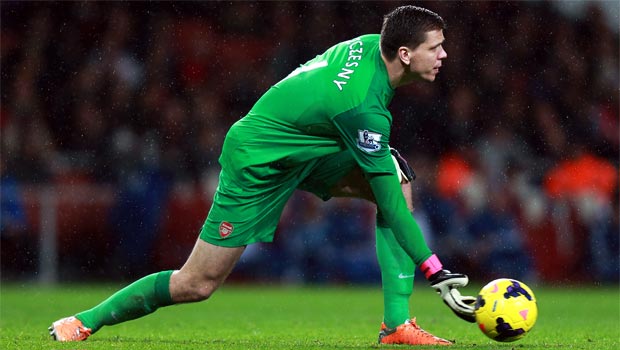 Arsenal goalkeeper Wojciech Szczesny says the Gunners will fight until the end for the Premier League title this season but he knows it will be tight after they dropped another two points against Manchester United on Wednesday.

The north Londoners were held to a 0-0 draw by United at the Emirates as they struggled to break down David Moyes’ men. The result leaves them a point behind leaders Chelsea in the table with 12 games to play.

Manchester City, whose home match with Sunderland was postponed on Wednesday due to stormy weather, sit just two points behind with a game in hand and fourth-placed Liverpool are only a further point adrift of the Gunners so it looks set to be an exciting title race.

Szczesny, however, believes Arsene Wenger’s side can come out on top if they quickly rediscover their best form.

“We have dropped points in our last two games and now we have a lot of teams very close together at the top,” he told the Sun.

“It is going to be tight but we will put everything into our last 12 games of the season and if we show our character I believe we can do it.

“We will be fighting right to the end and that’s the least you can expect from players playing for Arsenal Football Club. We showed a lot of mental strength to recover from the weekend defeat at Liverpool and now it’s time for us to push on and give it a real go.

“We are a bit disappointed that we didn’t beat Manchester United on Wednesday but at least we got a point against a very good side and the clean sheet is also a positive.”

Next up for the Gunners is another meeting with Liverpool in the fifth round of the FA Cup on Sunday before the big Champions League last-16 first-leg tie with Bayern Munich on Wednesday (Bayern 1.81, Arsenal 4.32, draw 3.38) and then they are back in league action against Sunderland on February 22.