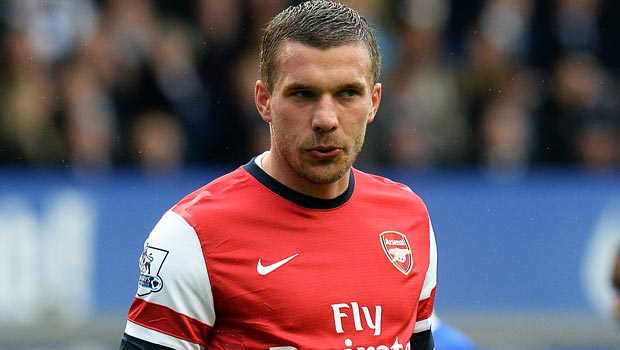 Lukas Podolski claims it would be a “disaster” if FA Cup finalists Arsenal fail to qualify for the Champions League via a top-four Premier League finish this season.

The Gunners are tantalisingly close to ending their nine-year wait for silverware after a penalty shoot-out Wigan at Wembley on Saturday set up an FA Cup final clash against Premier League rivals Hull City back at the national stadium on May 17.

However while Arsene Wenger’s men were scraping past the Championship side and cup holders, their place in the fourth Champions League qualification spot was being taken by Everton thanks to a 1-0 win at bottom side Sunderland.

Arsenal have an opportunity to jump back into the driving seat on Tuesday evening when they play host to London rivals West Ham at the Emirates Stadium.

And German striker Podolski has urged his team-mates to forget about the FA Cup now and focus their attentions on making sure they are in Europe’s top competition next season.

The 28-year-old said: “Every season is a pressure when you don’t win anything and the newspapers speak about it, the fans gets nervous but we have the chance this year to win the FA Cup so maybe it helps the club, us and the boss.

“But the other important thing is to get fourth place back because when you don’t play in the Champions League, it’s a disaster.

“Last season was the same. People and the newspapers speak about the last trophy being 2005 so of course, the pressure is there because we were in the semi-final and we have this chance to win the cup.”

Podolski added: “But as I say, the important thing is the league as well. We don’t forget the league because we are fifth now, we are not qualified for the Champions League, so we must do our work on the pitch – starting on Tuesday and this is an important thing.”

Arsenal are 1.40 to defeat the Hammers on Tuesday and move back into fourth spot, with Sam Allardyce’s side 8.29 to come out on top while the draw is 4.65.