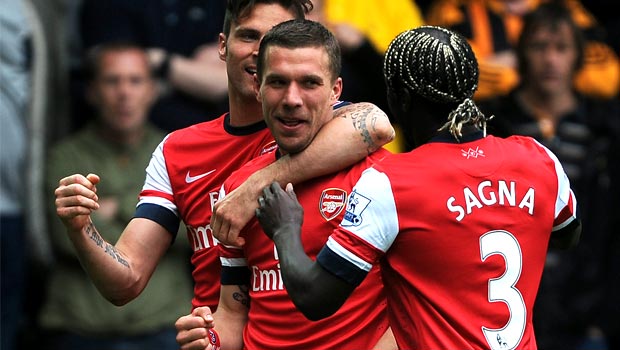 Lukas Podolski is keen to see out his contract with Arsenal, but would like to return to Germany in the future, possibly with his former club Cologne.

The forward has had mixed fortunes since arriving at the Emirates Stadium back in 2012 and he has constantly been linked with a return to his homeland.

The German international has struggled to play regular football and if Arsene Wenger gets his wish of bringing in more quality this summer, Podolski could slip even further down the pecking order.

The 28-year-old still has over 12 months to run on his current deal, and although he would like to see it out, he would also consider a move back to Germany if the chance came about.

“The Bundesliga is one of the best leagues in the world and therefore, in principle, is always interesting,” Podolski told Transfermarkt.

“In the Bundesliga, my thoughts naturally turn first to (Cologne). That is much more than a club for me, this is my home.

“Maybe I’ll return one day; that is, for me, always an option and matter of the heart.

“I would also like to meet my Arsenal contract. But as I said, yes, you never know in football.

Podolski showed his quality when he grabbed a brace in the 3-0 win over Hull last weekend and is sure to keep his place when the Gunners entertain Newcastle on Monday night.

Arsenal are 1.25 favourites to defeat a Newcastle side that is in the middle of a shocking run of form, and the three points would take them a step closer to securing Champions League football.