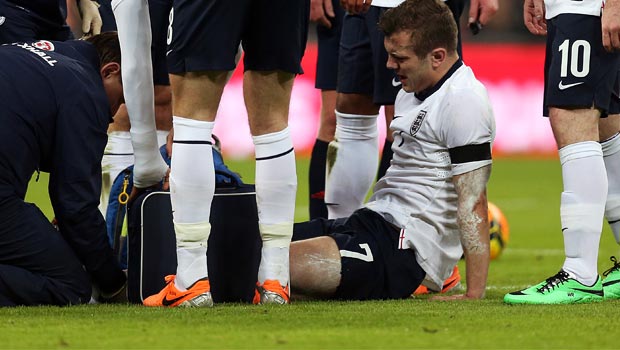 Arsenal’s chances of lifting some silverware this season have been hit as Jack Wilshere is facing six weeks on the sidelines with a broken foot.

Wilshere picked up the injury during England’s friendly clash with Denmark in midweek, but the player allayed fears after the game when saying scans revealed no damage and the foot was just bruised.

However, Arsenal then carried out their own examination of the foot and discovered a fracture that will keep him out for at least the next six weeks.

The news comes as a huge blow to the Gunners as he will now miss this weekend’s FA Cup quarter-final clash against Everton, along with some crucial Premier League and Champions League games.

“Jack Wilshere has sustained a hairline fracture to the navicular bone in his left foot,” a joint statement by Arsenal and the FA said.

“Wilshere suffered the injury during England’s international match with Denmark on Wednesday night at Wembley Stadium, in which he played 59 minutes.

“Following initial scans carried out by the FA on Wednesday night, further investigation by Arsenal’s medical team has discovered a crack to a small bone in Jack’s left foot – the navicular, an area of his foot which has not been previously injured.

“Jack will now require a period of approximately six weeks’ rehabilitation, before starting to regain his match fitness.”

The injury means Wilshere will miss at least eight games for the Gunners and the clash with Hull on April 19 is already being targeted as a return date.

The Gunners are keen to end their eight-year trophy drought and he will be badly missed against Everton on Saturday, where Arsene Wenger’s men are 1.82 to win and go through to the semi-finals.