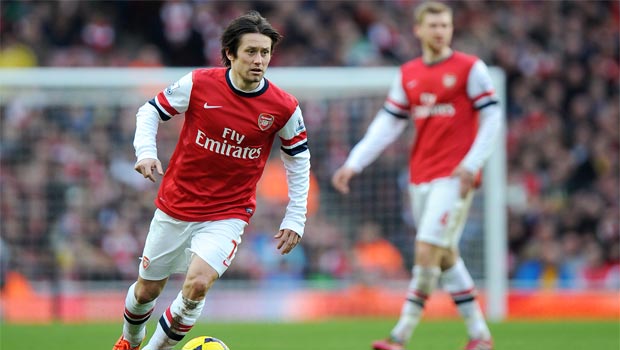 Arsenal have confirmed that defender Per Mertesacker and midfielder Tomas Rosicky have signed new contracts with the club.

The pair have been instrumental for Arsenal so far this season as they look to help the club end their long wait for silverware.

Rosicky’s performances in midfield have been a major boost to boss Arsene Wenger, who has been without Aaron Ramsey for several weeks due to injury.

The Czech midfielder was expected to miss out this season after the signing of Mesut Ozil, but he has gone from strength to strength thanks to a sustained run in the side.

He has played 27 times in all competitions this term and will extend his stay after already spending eight seasons with the north London club.

Mertesacker has starred at the heart of the Gunners defence alongside Laurent Koscielny and his performances have been rewarded with a new deal. The Germany international has made 110 appearances for the club since his move from Werder Bremen.

Speaking about the deals, Arsenal boss Wenger told the club’s official
site: “We are delighted that Mertesacker and Rosicky have committed their futures to the club.

“They are players of exceptional quality and experience, and have consistently proven themselves at the highest level. There is a great feeling of togetherness and belief in the group and this news will only help to strengthen this further.”

The pair will now be hoping to help the Gunners lift the Premier League trophy, but they have a fight on their hands after last week’s
1-0 defeat to Stoke left them four points behind leaders Chelsea, and are priced at 21.00 to win the title this season.