Arsenal forced to rush back Per Mertesacker 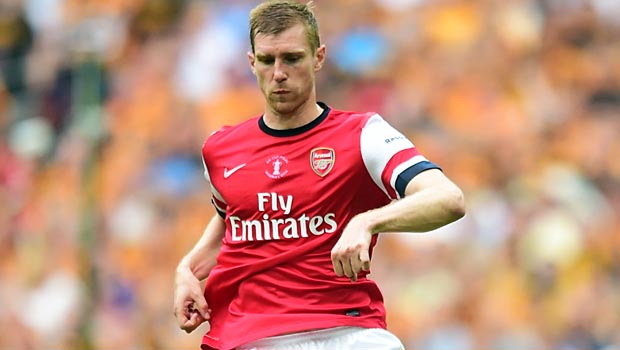 Arsenal boss Arsene Wenger has confirmed Per Mertesacker could make an early return to action in the Gunners’ Champions League qualifier first leg against Besiktas.

The Frenchman had initial planned to give his three World Cup winners, Lukas Podolski, Mesut Ozil and Mertesacker, more time to get up to speed having only recently returned to training.

The Germany trio sat out Saturday’s opening day win over Crystal Palace at Emirates Stadium and were expected to miss Tuesday’s clash in Turkey.

However, both Laurent Koscielny and Kieran Gibbs picked up knocks at the weekend and are unlikely to be fit in time to face Besiktas, leaving Wenger short of options in defence.

Having allowed Bacary Sagna and Thomas Vermaelen to leave this summer, Wenger only has Koscielny, Mertesacker and Calum Chambers to choose from at centre-half.

The Arsenal boss says he has no choice but to take Mertesacker to Turkey, despite the giant defender being short on match fitness.

“I planned to bring the Germans back in contention for Everton but, in case of emergency, I will take Mertesacker to Turkey,” Wenger said.

“It’s a bit early for him – ideally he would need one more week preparation but he’s willing to play, no problem. We are a bit short.”

Arsenal have never been eliminated from the Champions League in the qualifying rounds, reaching the group stages for the last 14 years.