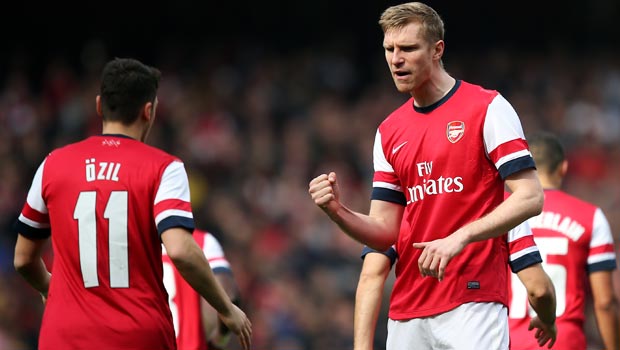 Per Mertesacker believes the return to fitness of several key Arsenal players will give the side the boost required to finish ahead of Everton in the fight for the Premier League’s fourth Champions League place.

The German defender spoke out following Sunday’s 3-0 win against Hull City at the KC Stadium which ensured they remain in the top four, just one point ahead of Roberto Martinez’s side who defeated Manchester United 2-0 at Goodison Park on the same day.

The win came on the back of a 3-1 home win against West Ham and a penalty shoot-out success over Wigan at Wembley which sealed an FA Cup final place against Hull on May 17.

It seems that Arsene Wenger’s men are rediscovering some of their good form from earlier in the season which had them battling it out for the Premier League title until they faded badly over the past two months.

Mertesacker claims the return of influential players such as Aaron Ramsey and Mesut Ozil from injury has been crucial in their upturn in form. And he is now confident that the Gunners will hold off Everton and secure the final Champions League qualification place.

“We need these moments where you can see we’ve got great players and some great finishers with Lukas Podolski on the scoresheet and Aaron Ramsey back on track, Mesut back on track,” Mertesacker told the club’s official website.

“All these players could make a difference.

“When you have your whole squad together for as long as possible, that can make a difference. We suffered a bit in the second part of the season but now everyone is… coming back to full fitness. We’ve had some long-term injuries and it’s good to have them all back.”

He added: “We have the potential to be a very promising side in terms of title races, but if you can’t keep your leading players fit all the time it makes it a lot more difficult.

“We are determined to keep fourth position.”

As Everton travel to Southampton on Saturday, the Gunners could be back outside of the top-four by the time they face Newcastle at the Emirates Stadium next Monday night. They are 1.29 to win, Newcastle are 7.55 and the draw is 5.20.