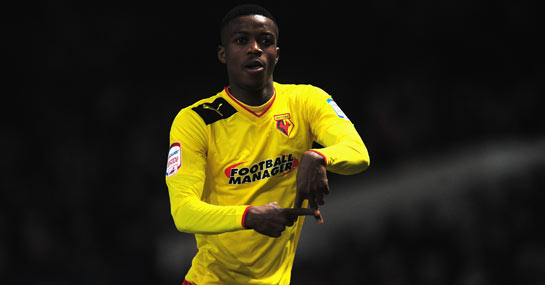 Amidst a hugely impressive campaign on loan at Championship surprise package Watford, Nathaniel Chalobah’s future has become the subject of close scrutiny.

Arsenal are the side most determined to contest it, as they aim to wrestle the promising youngster from the clutches of parent club Chelsea this summer.

And the Gunners could give 18-year-old Chalobah a big decision to make in the close season, as they look to tie up a deal for a player highly coveted among the Stamford Bridge hierarchy.

Chalobah has only recently settled his international future, becoming a regular fixture in England’s under-21 setup despite being eligible to turn out for Sierra Leone.

But he is now set to be the point of contention at club level, with Arsenal ready to tempt the Young Lions ace with regular first-team football at the Emirates.

After gaining a taste for frequent action during his loan spell at Vicarage Road, Chalobah may opt for more of the same in North London, as his first-team chances would remain restricted if he were to return to Chelsea.

Although the Blues are keen to hold on to the prodigy, destined to become a future England star, they have a number of central defenders currently ahead of him in their pecking order.

And as such, Chelsea would prefer to again loan out Chalobah, who can also operate in midfield, but are wary of allowing him to join a fellow Premier League club on a temporary basis.

If Watford achieve promotion, such a deal could be viable, but Blues owner Roman Abramovich would certainly not entertain the idea of lending the player to a top-four rival.

Therefore, only a permanent switch is plausible if Arsenal are to land their man, who will partake in England under-21s’ tilt at the European Championships this summer.

Standout performances in that tournament will further bolster Chalobah’s value, and it is likely that the Gunners will have to fork out in excess of £10m if they are to sign the starlet.