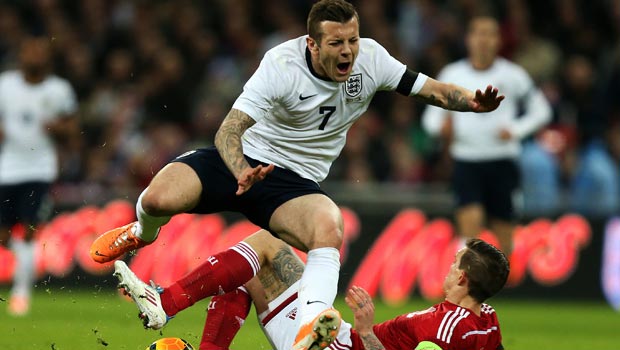 Arsenal boss Arsene Wenger has moved to ease England fears over Jack Wilshere and insists that the 22-year-old will be fit for this summer’s World Cup in Brazil.

Wilshere has been out of action since sustaining a hairline fracture in his foot while on international duty in the Wembley clash against Denmark on March 5, following a collision with Daniel Agger.

The Gunners‘ playmaker is stepping up his rehabilitation but with Roy Hodgson set to name his provisional 30-man squad on May 13, there had been concerns over whether he would make it or not.

However, Wenger has played down such talk and insists he will be fit to make the plane to South America.
“He is starting to jog this week. I would think two to three weeks,” Wenger said.

“I spoke to Roy Hodgson and I told him that Wilshere will be available for England. He will be just polished for England.

“Jack can be the positive surprise.”

Hodgson will be hoping to have a healthy number of options to choose from, having already lost Theo Walcott and Jay Rodriguez to injury, as the Three Lions have been given little chance to lift the trophy, currently priced at 30.00.

Qualifying for the knockout stages might be considered a real achievement, considering Italy and Uruguay, along with Costa Rica, make up a tough-looking Group D, with England priced at 2.20 to not make it through.

Wenger himself is of course hoping to get Wilshere back before the end of the season and the timescale of his recovery could see him fit for the FA Cup final against Hull on May 17.

The Gunners are desperate to end their trophy drought and are favourites at 1.30 to replicate their FA Cup success of 2005, while Hull are available at 3.50.