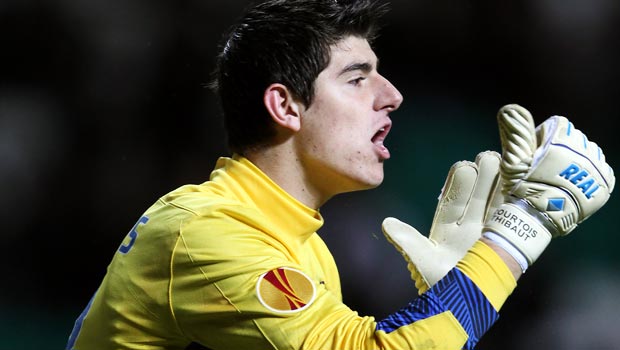 Atletico Madrid president Enrique Cerezo has admitted the club is still in talks with Chelsea over whether on-loan goalkeeper Thibaut Courtois will face his parent club in the Champions League.

The Belgian youngster is of course owned by Chelsea but has yet to play for the Stamford Bridge outfit, having enjoyed three seasons on loan at the Vicente Calderon since leaving Genk.

Courtois’ reputation has been burgeoning while in Spain, with Atleti on course to win their first La Liga title since 1996, thanks in no small part to the 21-year-old shot-stopper with the club boasting La Liga’s best defensive record.

Courtois made two crucial saves against Elche on Friday night in the 2-0 win which helped the capital club move six points clear in the table, but now attention turns to the Champions League with Atletico hosting Chelsea on Tuesday in the semi-final first leg.

UEFA announced that a clause in the contract saying Atletico would have to pay Chelsea £5m to let Courtois play against his parent club was invalid, but Cerezo has revealed that talks are ongoing.

“Courtois is a Chelsea player, everyone knows that, he has a contract with them, we have him on loan, and we want him to play in the semis of the Champions League and to stay one more year with us, and that’s what we’re discussing at the moment,” he said.

“We still don’t know what the result of the negotiation will be but I trust that Chelsea, who are a responsible and classy club, will resolve the situation for the benefit of Atletico, Chelsea and Courtois.”

Atletico go into Tuesday’s clash on the back of a four-match winning streak and have been installed as 1.96 favourites to win, with the draw next best at 3.29, while Chelsea – whose title challenge took a hit with a 2-1 home defeat to basement side Sunderland last time out – are available at 3.91.